Technology is always advancing, and this is both helpful and alarming. It's great because we have more effective and convenient equipment to utilize now. However, so do our enemies, and that just makes things more dangerous for us.

The biggest survival and safety impact that technological advancement would have is in weaponry. With highly advanced weapons being developed all the time, it'll make for some pretty deadly conflicts, not to mention deadly opponents.

So, make sure to stay informed of what you may see in the near future. These are some highly advanced weapons that currently exist, from our friends at Survival Frog Blog. 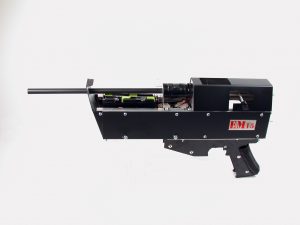 The Gauss rifle (also sometimes referred to as a Coil gun) was actually first developed way back in 1904.

The gun is made of one or more coils that are energized in a precise sequence in order to launch a projectile. Unlike other weapons on this list, it would not be surprising to see a Gauss rifle on display at a science fair, as it is possible to build a (nonlethal) version of this rifle yourself.

This futuristic weapon has the potential to exceed railgun firing speeds. 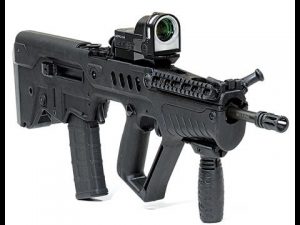 The Tavor SAW combines modern engineering with cutting-edge design in a compact package.

The IDF variant even comes with a hi-tech Mepro 21 day/night reflex sight. 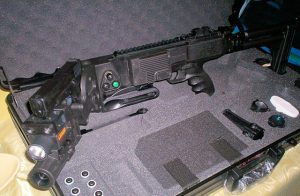 The CornerShot is actually a weapon accessory, but I think you’ll agree that it’s cool enough to belong on this list.

Similar to the periscope rifle, the CornerShot allows its operator to see and attack a target while remaining behind cover. The CornerShot comes in three variations: grenade launcher, compact assault rifle, and handgun. 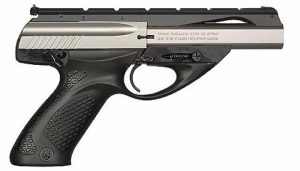 The design of the Neos was based on science fiction movies from the 1930s, so it’s no surprise that this gun has a futuristic feel to it.

Beyond the great design, it’s simply a great gun for self-defense. 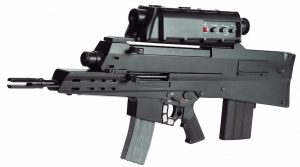 In addition to its futuristic design, the XM-25 used programmable airburst ammo that could explode beside hidden targets.

The GII Recon promises to put less weight and more power in your hands while remaining as battle ready as the original .308 Recon.

The SA58 Mini OSW is DS Arms’ take on the FAL design with options that include a rail top cover for optics and an SAW-style pistol grip for increased comfort and control.

Even just by looking at these weapons, they seem pretty advanced! Yet, as soon as you learn what they're capable of, it just gets even more impressive. I know I'd definitely like one of these weapons by my side, and wouldn't want to face someone with them.

For more on these futuristic weapons and other prepping info, head over to Survival Frog Blog.

A lost book, believed to have been long vanished to history has been found in a dusty old drawer in Austin, TX.

We are often compensated for products we link to. Click here for details.

We are often compensated for products we link to. Click here for details.